Marshall, Will and Holly
on a routine expedition
met the greatest earthquake ever known.
High on the rapids, it struck their tiny raft
(Ahhhhhhhhhhhhhhhhhhhhhhhhhhhhh!)
and plunged them down a thousand feet below
to the Land of the Lost.

Hands down, the best Saturday morning show ever.

Land of the Lost was a Sid and Marty Kroft production that first aired on Sept 7th, 1974 and conintued to run until Dec 4th, 1976. The series was about a family, Rick (the father), Will (the son), and Holly (the daughter) who are transported thru a portal to a another world built by Altrusians.

I absolutely loved this show when I was a kid. I picked up all three seaons from Amazon a couple of years ago and this show withstood the test of time. I still find it enjoyable to watch today. 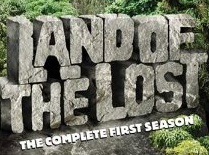 My favorite episode would probably be the one where Rick and Will met the Zarn. I thought the space ship made of light was pretty cool.

What was your favorite?

For a list of my favorite top 10 Saturday morning shows.