I didn’t have these.

I probably would have killed for those. You might have even been able to get me to wear a leisure suit for a week straight. Battlestar Galactica ruled.

I know I am going make some people groan with this statement… I loved Battlestar Galactica more than Star Wars. 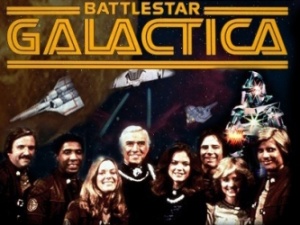 I do not recall which one I watched first. When Star Wars originally came out in 1977 I was not allowed to see “PG” movies, but I was allowed to go the following year on the movie’s second tour. And, as you can guess, 1978 was also the premiere of Battlestar Galactica on Sunday, July 7th, at 8:00pm.

I was hooked from the start. Almost overnight, my school supplies reflected my addiction as artistic renditions of “Colonial Vipers” and “Cylon Raiders” battled it out across the confines of my spiral bound notebook.

My parents and I rarely saw eye to eye when it came to my choice of TV shows but this was a rare gem that the whole family watched together.

If you are a Battlestar Galactica fan you probably watched the remake on the SyFy channel. I had mixed feelings about the new version.  I wanted to like it, but I hated the character changes such as Starbuck being a woman and that the Cylon  “toasters” where not a main focus. It was more about Cylons that looked human. As I continued to watch the series, it really grew on me and now has become one of my favorite series of all time.

Are you a Battlestar Fan?